This Hobbit House Will Have You Dreaming of Middle-Earth

Inspired by the “Lord of the Rings” stories she enjoyed as a child, the Idaho native set out to build a tiny home in a hillside for an unlikely client: a real-life hobbit.

“I grew up watching the 1970s cartoon, and I’ve read ‘The Hobbit,’” Wolfe said. “I really always loved the house and the type of house that they lived in.”

Wolfe found the perfect backdrop for her Shire in the small central Washington community of Orondo. (It’s not quite Middle-earth, but smack dab in the middle of the Evergreen State.) She had already built a treehouse in Hawaii; for her next project, she had her heart set on an authentic, buried hobbit hole inspired by characters from the famous “Lord of the Rings” books.

But what the soul wants, the soil can’t always deliver: The property offered million-dollar views, but getting construction equipment up to a rural hillside would prove challenging.

“I wanted the house to be buried, to be as authentic as possible. I tried to do a lot of research, but there’s not a lot out there,” Wolfe said. “I couldn’t get a concrete truck up here. We could have mixed it by hand, but it would have been really difficult. I talked to the building department, and they just said nobody’s ever done it, but you can give it a shot.”

Wolfe relied on the construction know-how she’d picked up from her parents – her mother remodeled houses when Wolfe was a child – and brought in a backhoe to clear the land. Wolfe needed to ensure the hobbit hole could hold the foot of dirt she planned to place on the roof, so she used marine-grade, pressure-treated wood.

“Any time you put dirt on top of a house, when that dirt gets wet, it’s basically having a swimming pool on top of your house,” she added. “It’s a lot of weight.”

Up next: an entrance fit for a hobbit. Wolfe wanted a signature round entryway, which she created using an industrial-sized cable spool. She enlisted a local designer to craft the hinges and the opening to the 288-square-foot space. He repurposed a trailer hitch to build the door handle.

When guests enter through the circular portal, they immediately stand in the bedroom. To the right is a fireplace, which helps heat the home in the winter, along with a woodworker’s bench. To the left is the bathroom, complete with a large, wooden tub. 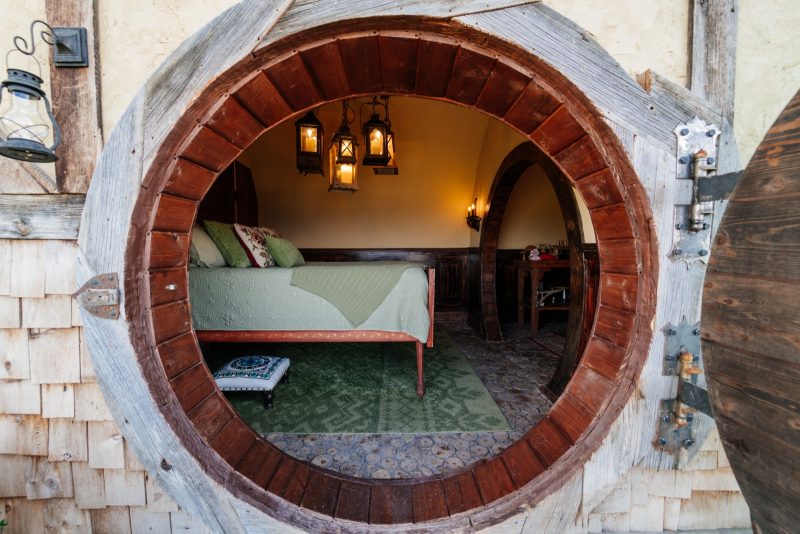 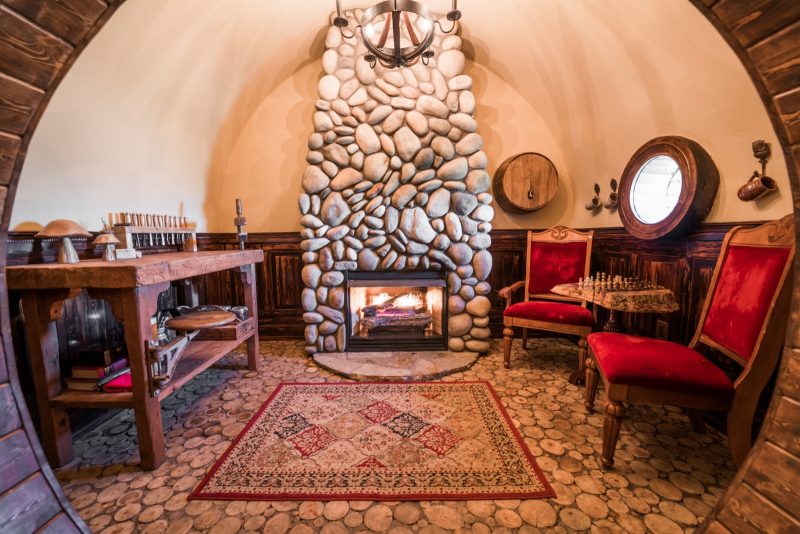 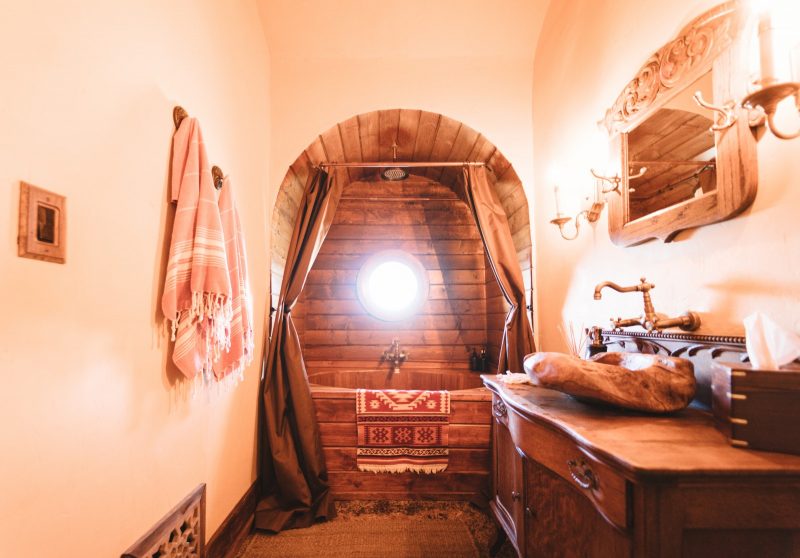 Other touches were sustainably sourced. Wolfe crafted the cordwood floor from roadside logs she gathered, chopped up and glued together. She found some furnishings on Craigslist. The cozy wood Jacuzzi bathtub came from a used furniture shop. 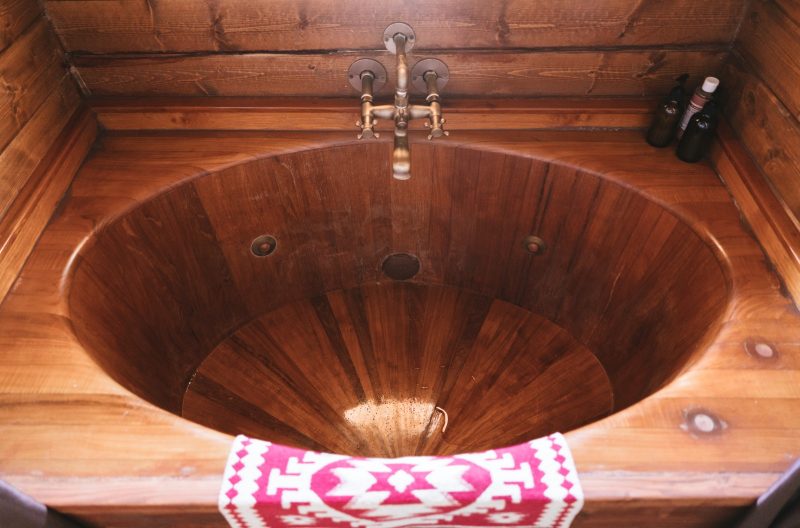 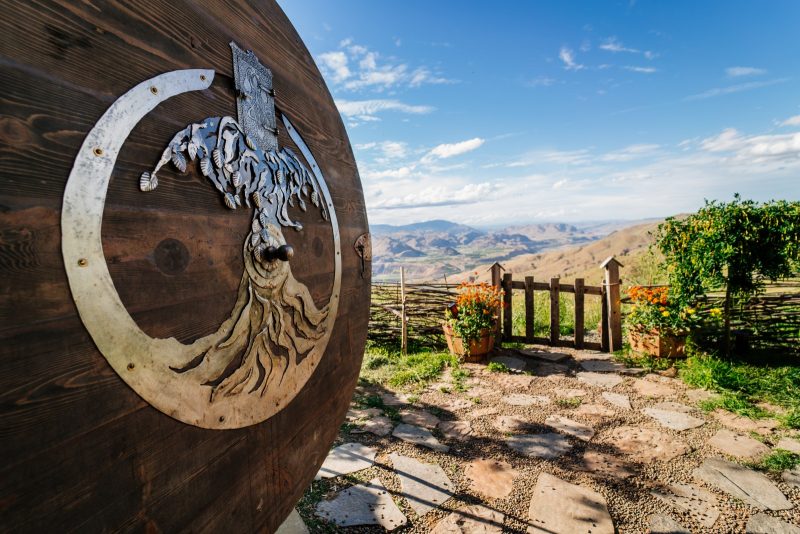 With a location so remote, Wolfe installed solar panels to generate electricity. The dirt-covered roof has the benefit of keeping the home at a cool 55 degrees year-round (the oversized fireplace comes in handy in cooler weather). Wolfe’s sister, a landscaper, wove sticks and branches together to create a hobbit-style fence, greeting fans and friends alike. 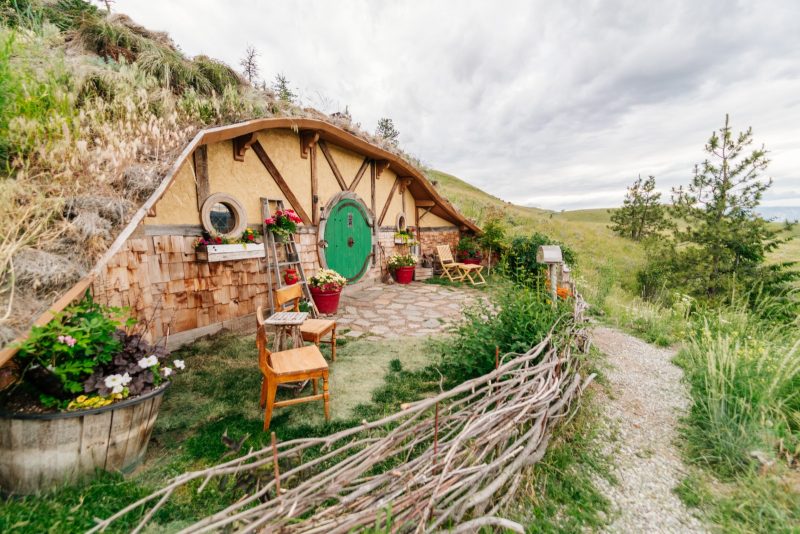 Speaking of fans, they’ve made this spot as beloved as the books themselves. The home is available as a vacation rental and is so popular, it’s almost fully booked for the next year. Some guests come in full hobbit regalia, Wolfe said; others have used the home as a backdrop to get engaged.

Given the home’s popularity, it’s no surprise that Wolfe is looking to expand. She’s got two more hobbit holes planned for the same property.

“I want to build a communal kitchen … that will look like an English-style pub,” she said. “People from all over can meet, or come stay with their friends and family, and break bread together like hobbits would.”