Pour yourself a Manhattan and turn up the Sam Cooke: this mid-century modern manse is on the market for the first time in decades.

The Los Angeles-area house hasn’t been open to the public since it was built in 1957 (during the Dwight D. Eisenhower administration, in case you’re keeping track).

The so-called “Research House 1957” was part of a series in the Los Angeles area to showcase new ideas in modern home design, according to listing agent Sam Buchanan. This home, designed by architect John C. Lindsay, was reportedly so radical that a quarter million people flocked to Flintridge Hills, CA, to see it once it was complete.

“Research House 1957… has been planned and executed specifically to illustrate what the new products in the building industry can do, especially when they are put in the hands of rating experts,” wrote House & Patio magazine in its winter 1957 issue.

“[The house] is not, perhaps, properly termed avant-garde, though its system of laminated beam construction literally fastens it to a hillside – something of a revolution in the trade,” the magazine continues. 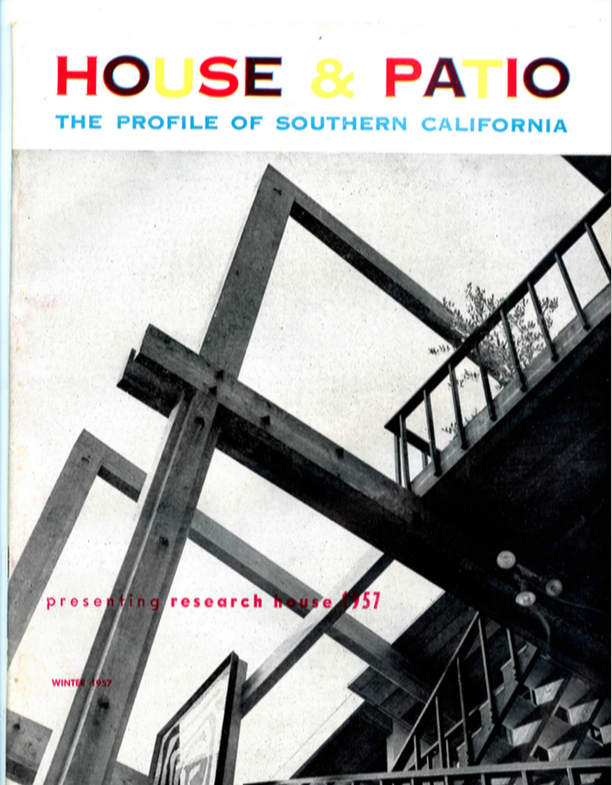 Perched on a hillside, the 2,935-square-foot house looks like something straight out of “I Dream of Jeannie.” The entryway carpet is a groovy olive green and is anchored by a drop-down fireplace.

Bathrooms are decorated with original ornate wallpaper, including one with flamingo pink polka dots. One even includes a pop-out clothes hamper and drop-down scale, thought to be innovations at the time, Buchanan said.

The kitchen features a built-in can opener and pop-out toaster oven, while the original soda fountains still work.

The backyard is a “Mad Men” dream, with a mod-shaped geometric pool, hot tub and views of the surrounding mountains.

An outdoor kitchen has bright yellow, orange, green and blue cabinets – a place where the Brady Bunch would’ve felt right at home.

A number of original furnishings remain at the house, Buchanan said. A few spots were given modern upgrades about 10 years ago.

But perhaps the most unique feature, Buchanan said, is an underground tunnel built to service the elevator (yes, the elevator still works). The tunnel is 10 feet wide and more than 8 feet high – perfect for a modern wine cellar.

The current owners had lived in the home since 1959, but the husband recently passed away at the age of 93, leading his wife to put the property up for sale. The first open house, last week, drew 500 visitors.

“It’s been hidden away for 60 years,” Buchanan said. “I know a lot of these people can’t afford a $3 million dollar house, but I wanted them to see it.”

The house is listed at $2.99 million – or, roughly, 245 times what the average house cost the year this place was built.